The white Himalayan salt lamp is a beautiful, decorative piece for your home. As with all Himalayan salt lamps, it has some magnificent healing properties and health benefits. Only white is far rarer than the red, pink, and orange lamps you can buy.

The Benefits Of White Himalayan Salt And Its History

Geologists estimated it to be possibly around 800 million years ago, and the salt mines were formed from a tectonic plate movement, thus trapping a shallow inland sea, which slowly evaporated forming thick mineral-enriched sea salt deposits. They are now called the Himalayan salt range.

These mines are situated on the outer western edge of the range, of the Himalayan mountains, in a place called Khewra in Pakistan. Some tunnels stretch two miles inwards to the mountain, and they harvest from six mines, all with a vast supply of the salt crystals.

That is the only mine you can retrieve pure 100% natural Himalayan salt!

Himalayan salt comes in different variations and strengths of color. The colors change with the amount of iron and other trace minerals such as Calcium, Chloride, Magnesium, Potassium, and Phosphorus, to name a few. 98% of the salt is made up of Sodium Chloride, and the rest is the additional 84 trace minerals, which are what give the salt lamps their color. The color of the salt will differ depending on the amount of the trace minerals infused into it through the natural process. The stronger the color, the more of the certain trace elements the salt contains, for example, the higher the iron content, the deeper red the salt will be.

What Is It That Makes A White Lamp Different To The Average Red, Orange Or Pink?

As mentioned before, the percentage of iron and other minerals infused into the salt makes the difference. Hence, a lower iron percentage makes the salt result in a white or colorless crystal. That means it is purer and perfect for your health.

The benefits include some of these beautiful healing properties:

There are many, many benefits to having or using a salt lamp, but why would we choose a white one over a red-pink or orange? 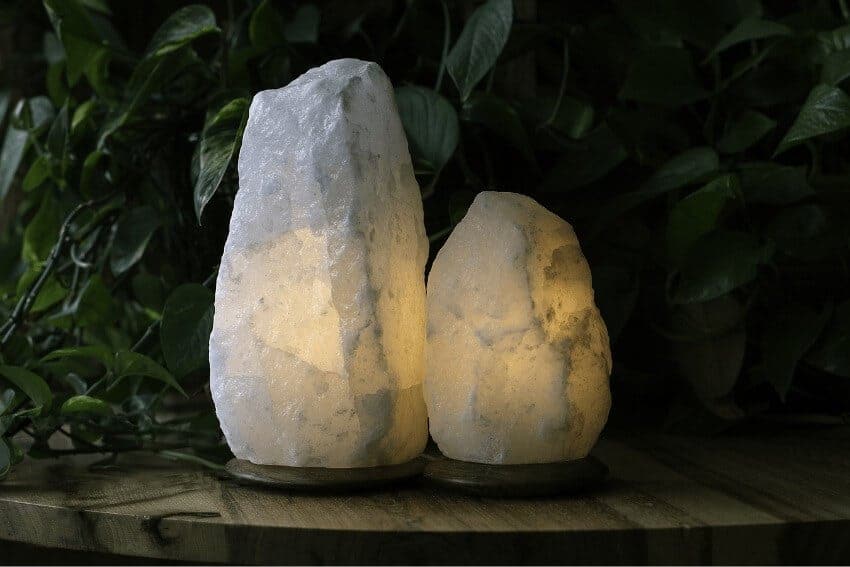 They don’t have any fewer health benefits because they have less color (which is what a lot of people think, myself included before I knew about them). It’s the opposite way round, and the white salt benefits you by having far more purity to there energy.

When looking into buying a new salt lamp, be sure to check out the authenticity of the item first.

Himalayan salt lamps can be relatively reasonable in price because they are more readily available. However, white ones will cost more because they are much rarer if you find one for $15. I would certainly question the authenticity of this product or retailer.

You can buy some stunning large white salt lamps that make beautiful decorative pieces for your living space or workplace, but does the size really matter? The short answer is yes! The bigger, the better in this case. 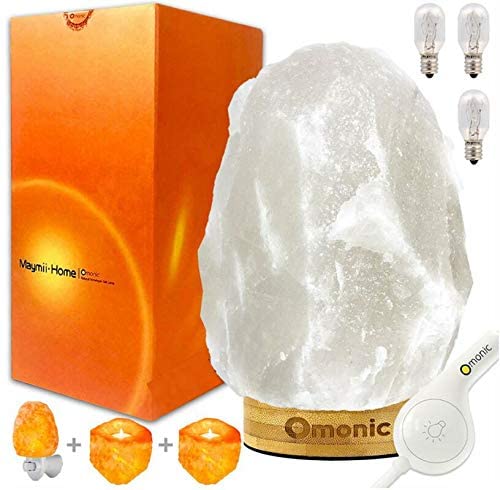 One of the things I’ve come to realize through my training in crystal healing is that, with most crystals and precious gems, the size of the crystal piece doesn’t matter, no matter the size, it has the same healing properties and metaphysical properties. Except, with a giant crystal, in most cases, it will have the ability to charge a smaller piece of the same crystal that is placed on top of the larger piece.

However, with salt lamps, this is not the case. A large salt lamp will project more significant amounts of pure energy and more of the negative ions than a smaller white salt lamp or even a pink salt lamp. The negative ions that the lamps give off when heated from the bulbs neutralize the positive ions projected from electronic goods around the home or office, such as:

These electronic devices can trigger or worsen conditions or allergies, stress, and cause trouble with sleep. So by neutralizing them, the positive and negative ions combine and assist in cleansing the air around you.

What Are Other Uses For Himalayan Salt?