What are the Best Tarot Cards for Beginners?

First of all, I would like to share with you a little bit of history of the modern-day tarot cards that we see today, and where they have come from.

A Short History of Tarot 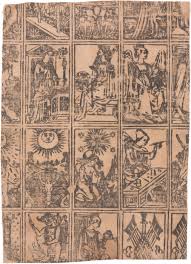 I am not going to get into the full history of Tarot as it is a lengthy history and best saved for a separate article. Tarot was derived from an Italian playing card game called Trionfi. This literally translates into triumphs. Trionfi is dated back to the 15th-century and was originally based on a series of poems called Trionfi by the Italian poet, Francesco Petracco, commonly known as Petrarch.

The first recorded use of the word Trionfi with relation to cards is in the records of Giusto Giusti who was a Florentine notary. The record was of a transaction of transferring two very expensive and personalized decks of the cards to Sigismondo Pandolfo Malatesta. The recorded transaction took place on the 16th of September 1440, however, the cards, and the name must have been used for a while before that.

The Original Deck and Book Set:

The first Tarot deck and book set was likely to have been made circa 1460. These decks were likely to have been one with 78 cards and structured like the modern-day Tarot. However, the design of the actual cards was totally different from the decks that we now see. Classical figures were used for both the face cards and the trump cards.

There were around 15 handmade decks that were made for the rulers of Milan at the time. Some of them are still preserved in museums. The best-preserved decks are the Cary-Yale deck. This deck is thought to have been produced in 1441 for the marriage of Bianca Maria Visconti and Francesco Sforza in October of that year.

This is a reprint of that historic deck, at a fraction of the price:

While this deck is one of the oldest decks of all time, it may not be the best for beginners. (That does not mean that you shouldn’t buy it!) You will use it eventually.

With the short history of tarot out of the way, let’s have a look at what the best decks for beginners are!

First of all, we have the Rider-Waite Tarot pack.

Arthur Edward Waite encouraged Pamela Colman Smith to produce a tarot deck with appeal to the world of art that would have significance behind the symbols, and thus make the deck more important than tarot packs previously used for centuries. The result was the unique Rider-Waite Tarot deck which has endured as the world’s most popular 78-card tarot deck.

The innovative cards, including the 56 Minor Arcana, depict full scenes with figures and symbols. This featured, combined with Pamela Smith’s ability to capture the subtleties of emotion and experience, has made the Rider-Waite Tarot the basis for the designs of many 20th Century packs. The Original Rider Waite Tarot Pack is a facsimile edition originally printed from plates that were destroyed during the bombing of London during World War II. The deck and book set comes complete and in full-color with original Tudor Rose back design, Celtic Cross divinatory chart, and The Key to the Tarot by Arthur Waite. —Midwest Book Review

These cards are one of, if not the best, starter decks available. They are printed on a very sturdy card which makes them ideal for first cards. This is very good as you will usually need some time to get used to handling the size of them because they are larger than normal playing cards. The only issue with these is that the book may not be as detailed as you may like if you are using them as your first deck, so I suggest buying The Ultimate Guide to the Rider-Waite Tarot book too.

This book will tell you everything that you need to know about the deck that it accompanies. It will tell you the ten most important symbols on each of the cards in the deck with hundreds of illustrations to make it easy to use. Each card is also joined by a brief interpretation of the following:

You are able to start your very first reading or improve your current skills very easily with the help from this book. There is a top ten section for the following:

The second deck that I advise is The Wild Unknown Tarot Deck and Guidebook in an Official Keepsake Box.

This is an absolutely stunning box set. It comes in a large keepsake box with a lifting ribbon, along with a fully illustrated, 200-page guide book including spreads, and 78 full-color Tarot cards.

Some of the images in the deck may not be to the taste of everyone. Therefore I would highly suggest looking through the images after clicking on the image above. However, this is what fascinates me. I love that the images are unique. Don’t get me wrong. I love the traditional Rider-Waite deck too, but these have a different look to them which is inspiring and intriguing every time you use them.

You are probably not going to find a better set for this price. The designers have thought about everything. They have added a silk ribbon onto the flap and a magnet to keep it closed, and a cardboard sleeve to keep the box protected. It contains a beautifully written guide book. It gives excellent, simple, and straightforward interpretations and meanings of the cards, along with easy to use explanations of the cards.

If I am completely honest, I can not give you a very good conclusion… This is only because I love both decks so much. But I will try.

If you are just starting out on your Tarot journey and want to go down the traditional route, I would say to buy the Rider-Waite Deck and Guide book. If you prefer to go down more of a modern route of learning tarot, then I would say to buy The Wild Unknown Tarot Deck and Guidebook in an Official Keepsake Box set. To make things a little more interesting, if I were you, I would buy them all. I honestly use both sets almost daily depending on my mood.

Leave a comment below and let me know your favorite and which deck you buy or already own!